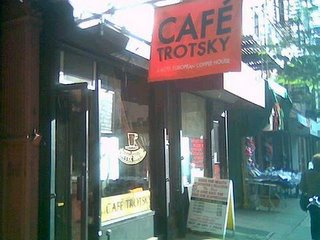 And while we're on the Revolution Day theme, don't forget that Leon Trotsky, one of the leaders of the revolution, lived in New York for a couple months in 1917. Trotsky was born in Yankova, Ukraine, in 1879 and after being expelled from France and Spain he ended up in New York in January 1917. Together with his wife and two sons, he lived at 1522 Vyse Avenue in the Bronx.

Trotsky was active in the New York Russian expatriate community, and particularly in the communist movement. He wrote for the newspaper Novyi Mir (The New World), then based at 77 St. Mark's Place in the East Village, and also lectured at the East Village's Russian Free University on East Seventh Street.

He left New York March 1917 to return to Russia to join the other leaders of the revolution. At the time, the Bronx Home News ran the headline "Bronx Man Leads Russian Revolution."

Trotsy is remembered in the city at Cafe Trotsky (192 Orchard at Houston), a Viennese coffee house on the Lower East Side. 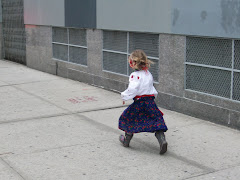